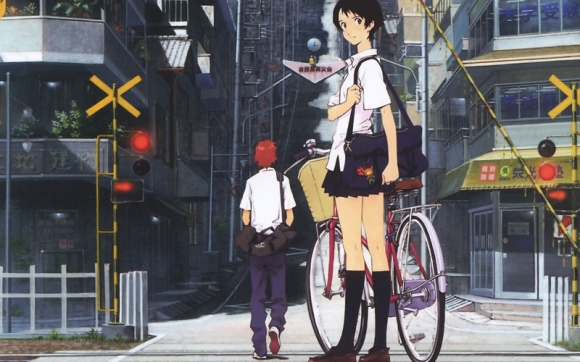 Makoto (Riisa Naka) seems to be having the worst day in her life.  She wakes up late which makes her almost late for school.  She mixes the wrong ingredients in cooking class, which causes a small incident.  During a break from class other classmates pummel Makoto.  While staying after class to clean the classroom, Makoto takes some books to another room, located else where in the school.  It is at this time where Makoto stumbles upon the device that gives her the ability to travel back in time.  Finally while riding her bike home Makoto’s brakes give out and she goes hurtling towards an on coming train, at the bottom of the hill.  With the ability of the device Makoto goes back in time just enough to stop her-self from crashing into the train.

While not delving to much into what happens next, but Makoto begins to have fun leaping through time, trying to extent her time doing karaoke with her friends.  She soon realizes that even the smallest decisions can have a big effect on other events.  In changing her bad day substituting whom the other students pummel, or who mixes the wrong ingredients in class have worse outcome for others then just having a bad day.

This film shows that anime can handle lofty and heavy themes, and is not just about giant robots for kids.  While this film is for a younger audience it is still enjoyable by those who are older.  If you are looking for an anime film that has a more thought into it then what is usually promoted on T.V., check this out.

2 thoughts on “The Girl Who Leapt Through Time”